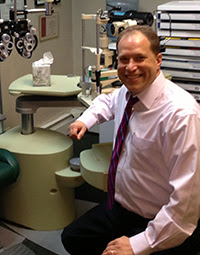 Dr. Jack Fried is a graduate of the New England College of Optometry in Boston Massachusetts, and earned a Bachelor of Science degree from Adelphi University in Garden City, NY. Prior to joining Dr. Berliner, he was in private practice in Brooklyn, Oceanside, and Great Neck, where he treated eye diseases, and co-managed cataract/laser surgery. Dr Fried has lectured on co-management of laser (LASIK, PRK) procedures at continuing education courses to local Optometrists. Dr Fried has previously worked with the Kress Vision Program at NYU Downtown Hospital.

He is licensed to practice optometry in the states of New York, Massachusetts, and Florida.

Dr Fried is an avid motorcycle enthusiast, and his other hobbies include skiing, wreck diving, playing the bass, and long walks on nature trails with his beautiful wife and 3 children and dog.

WE ARE BUILDING A BRAND NEW OFFICE / STORE !!

While we are under construction we are temporarily relocating for the next few months .

The Huntington office will resume operations in our temporary location on THURSDAY 10/27.